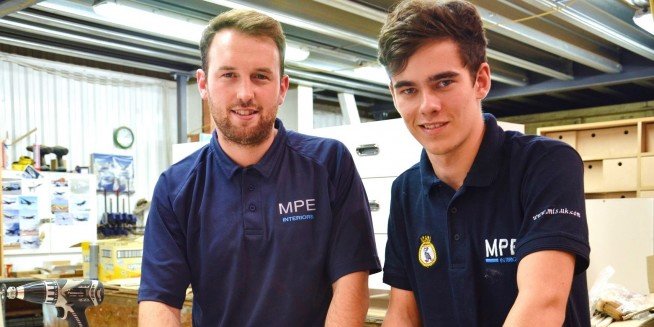 AN apprentice joiner from Birkenhead-based MPE Interiors is among a team of trainees handed a national award for a community project marking the First World War and showcasing their skills.

Tom Whetnall and trainees from nearby Cammell Laird, the specialist marine and engineering services company, received the Centenary Apprenticeship Challenge trophy at an awards ceremony in London. They were presented the trophy by MP Philip Dunne, the Minister for Defence Equipment, Support and Technology at the Ministry of Defence.

The challenge formed part of the Made by Apprentices 1914 – 2014 campaign led by the Skills Funding Agency and the Ministry of Defence. It was designed to showcase the importance of apprentices to British industry since the beginning of the First World War.

The apprentice team’s award recognised their renovation of the HMS Liverpool bell, which is now housed in Liverpool’s Church of Our Lady & St Nicholas. The bell was traditionally used as a font for the baptism of seafarers’ children. It was donated by the MoD to Cammell Laird and the apprentices created a new stand for it, while also working with the church and wider Merseyside community.

John Whetnall, a director of MPE Interiors and Tom’s father, said: “The apprentices demonstrated a range of craft skills, including joinery and cabinet-making offered by MPE Interiors. They did a great job in restoring the bell and building the new stand. Also importantly they worked well as a team and provided an excellent service.”

The centenary challenge was established by the Prime Minister, David Cameron, as a way of marking the centenary of the First World War. One hundred British companies had teams taking part.

MPE co-director Cliff Grainger added: “We are proud of Tom and all the apprentice team who won this top accolade. This challenge marked a very important centenary and the contribution of apprentices in industry over the past 100 years. It also showcased the fantastic skills and motivation of today’s apprentices and the quality of apprentice training and customer services offered by companies such as MPE Interiors.”

During HMS Liverpool’s life, the bell was turned upside down and used as a font to christen children. An estimated 30 youngsters were baptised using it. The apprentices created a new stand allowing the bell to be used as a font and a bell, and also being in keeping with the church’s interior.

HMS Liverpool, a Type 2 destroyer, was in service from 1982 to 2012. The vessel made her final visit to Liverpool on February 29, 2012. The Church of Our Lady & St Nicholas serves as Liverpool Parish Church and is known as the seafarers’ church.