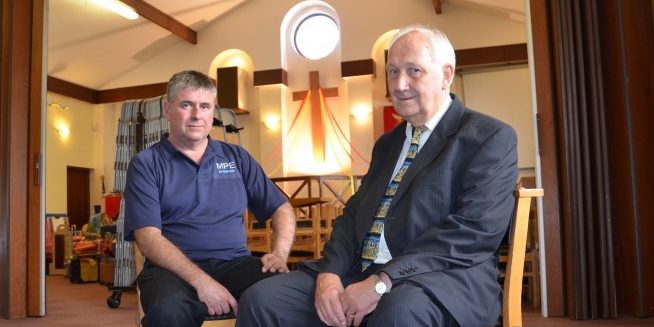 Serpentine Road Family Church in Liscard says it is immensely grateful to Birkenhead fit-out specialist MPE Interiors for providing its services at no charge to support its upkeep.

MPE run by directors John Whetnall and Cliff Grainger have provided a range of services to the church for six years on a ‘pro bono’ basis as part of their efforts to support the local community.

Church secretary Jim Clarke, seated front right in the top picture with John Whetnall, said MPE offers a hugely valued service to the church, which celebrates its 25th anniversary this year, helping it maintain its fixtures and fittings.

“John, Cliff and their team at MPE have always been on hand for Serpentine Road whenever we have needed them,” he said. “They have undertaken a wide variety of joinery maintenance and interior repairs including to doors, windows and a large dividing screen we have.  Despite being very busy themselves they have never charged and have always completed the work quickly and efficiently to the highest standards of workmanship.  This would be a significant burden on church resources without MPE’s generosity. On behalf of everyone at the church, and the community groups that use the building, I would like to thank MPE for all its done for us.”

Mr Clarke first met Cliff and John when they worked together at Cammell Laird shipyard in Birkenhead in the 1980s and 1990s. Mr Clarke still works for the shipyard as one of its most experienced estimators. MPE meanwhile, which was established in 2001, continues to supply the shipyard with fit-out and joinery services.

Mr Clark added 2014 has been a landmark year for the church with its 25th anniversary with a major highlight being a special anniversary service with former Bishop of Liverpool James Jones.

MPE is one of the leading and most-experienced marine outfitters in the UK. It has turnover in excess of £2m and more than 30 staff at its manufacturing base in Old Bidston Road.

MPE’s work ‘on land’, sees it undertake outfitting in both the residential and commercial property sectors.